If you thought the Old Style Bar Project was all about those square signs, think again. We celebrate all types of Old Style signage...no discrimination. Further down on Montrose is Peacock Liquors, with an amazing sign that says "Old Style Lager" underneath. 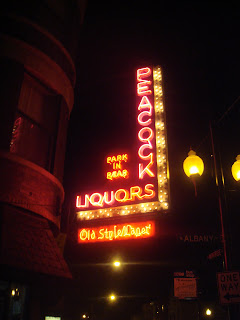 "Is this just a liquor store?", we wondered... We walk into the store and are surrounded by boxes upon boxes of beer. Shoulder high, but it's a pretty small place. We make our way through the beer maze and come across a cute cat, and then meet the owner (of the store? Cat? No idea). We look beyond them and see a bar that looks transported from a basement in Wisconsin. There is a man behind the bar who couldn't have been less than 70 serving beers to a few customers who didn't bring the average age down much lower. "Bars closed," the owner says. Our watches say 11:45pm, but we won't argue, but we will be back. Oh yes, random bar in Peacock Liquors, we'll most definitely be back.

So we finally made it back to Peacock after our first "visit" a few months ago.  They actually let us in this time, as it was still early.  There was a good group sitting at the bar, and we loved our options on tap! 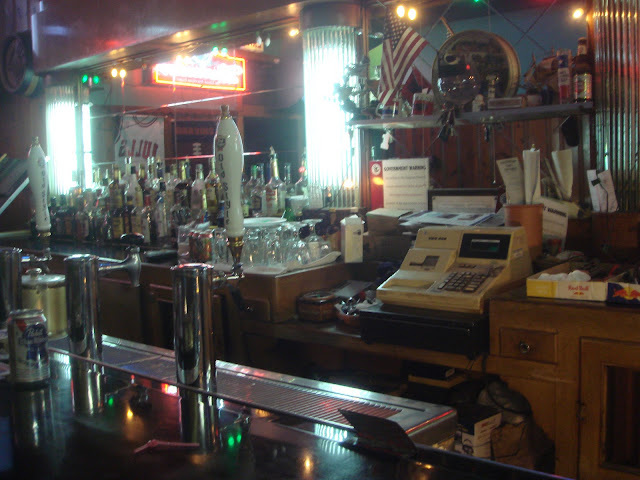 We chatted with the bartender, Sal, who had been working there for over 30 years and was part owner of the place...he said that this location has been Peacock Liquors for almost 80 years, right after prohibition, and that the neon sign has been up since the 50s or 60s.

Sal was an old guy, probably in his 70's, and was decked out in a nice vest...he kinda reminded me of Lloyd the Bartender from The Shining, except I had to pay for my drinks and well, Sal was very much alive...  He also told us that the cats name was Garth, and I immediately thought of "Wayne's World", but my brother informed me what kind of music that was on the jukebox..."both kinds". 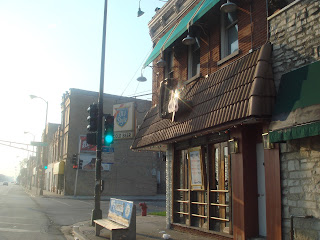 Andy's must have recently closed...I took this picture about a month ago and it was still open.  It's in a good location so I bet something will open up there soon.
Posted by Adam K. at 8:08 PM No comments: 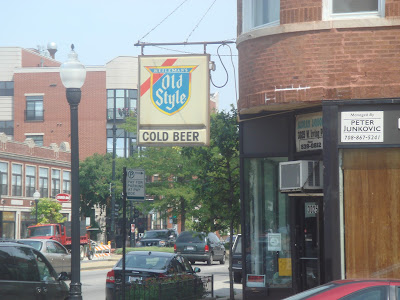 Most people are afraid of something--heights, the dark, public speaking, calculus...  With me, it's spiders.  I hate em...make my wife kill them...  Other bugs, snakes...I'm totally cool with them, but not spiders.  People say if you want to conquer your fear you need to take it head on.  Well, I'm not going to jump into a tub with tarantulas, but I did end up conquering a different fear last week.  My fear of Jadran Liquors...

Jadran Liquors is this little bodega-looking place on Irving Park that I had been scouting out ever since I started The Project.  It looks like one of those sketchy corner stores that you can buy the essentials and not much else, and the two times I have scouted it out there have been older men hanging out, sitting in folding chairs, drinking bottles of strange liquor, yelling at each other.  Why would anyone want to go there?  If I lived next door, I'd rather drive 20 miles to a Wal-Mart than buy toilet paper from this place.

Anyway, my brother and I needed to get this done.  They have an Old Style sign out front so we had to go in...  We got to the corner across the street, and we see 8 gentlemen sitting down all looking at a guy standing up, speaking and pointing...he is very animated in whatever he is trying to get across.  What was going on here?  Was this a local CAPS meeting?  Was that guy an undercover cop finally busting the joint?

We were pretty nervous at this point, so we ended up walking one block away on the other side of the street, crossing the street at the light (Sacramento), and then walking back down towards Jadran.  When we were getting close, I turned to my brother and said, "I'm just gonna go in...".

"Well, you had better be right behind me...", I responded.  The whole time I have this picture of Biff Tannen in my head (What are you...Chicken?).

I walk in, everyone stops talking and this guy immediately grabs my arm... "$2 to enter the bar," he says with a menacing look and this death grip on my arm...  What the hell is going on?  Are we gonna leave this place alive?

Everyone else then starts laughing and I realize this crazy man is just joking...  They then ask us where we are from, and they don't mean what neighborhood...  "Um, well, we're American...uh, German, Scottish..."  They didn't care, but they did care to tell us where they were from..we met:

We spent the next 15 minutes talking to Joey, who proceeded to tell us that the other guys playing cards at the table and not speaking English were also from the former Yugoslavia.  I didn't get around to ask him how the hell this place stays open, while looking at the rolls of TP on the shelf that had "99¢" written in ink on each individual roll.  We also saw Joey kill two cockroaches that scurried across the floor (I would have totally got that).  Disgusting.

Once 8:00pm hit, the old man sitting at the door who hasn't said a damn word starts motioning towards the door, saying something not in English.  Joey tells us that the place closes every night at 8, which is probably a good thing.  As we walk out, Edgar gives me a hard slap on the back and says, "Thanks for coming in, guys...", which I think was his way of saying, "Don't come back anytime soon..."
Posted by Adam K. at 5:54 PM No comments: 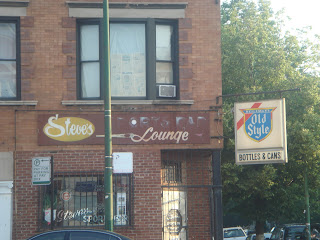 Steve's door was locked when we tried it, but after a few seconds, a younger man in a wheelchair came over and unlocked it.  He said they were open, so we walked in, went through the saloon doors and grabbed a spot at the bar.  Steve was just finishing up some food so he cleaned up and went to the other side of the bar to get us our Old Styles.

Did I mention that this place had saloon doors?  Freaking awesome.  Unfortunately, that was the only awesome thing about this place.


After Steve got our beers he was nowhere to be found...I had read that Steve also owns the laundromat next door, so maybe he was over there.  That's when I noticed the security camera in the corner, pointed at the bar.  Seriously?  Also, wheelchair guy was just hanging out right behind us...not saying a word.  We felt like Walter White and Jesse Pinkman in the meth lab...was Steve watching us?  Also, the show "Cops" was on all the TV's...fitting.

Another thing I didn't like about this place...it was the most cluttered bar ever, even more than Rose's, and at least Rose just had odd collectables and couches everywhere.  Behind Steve's bar there were stacks of paper, receipts, empty liquor bottles, random pictures, books, and who knows what else.  You know that friend you have in grade school who never lets you in their house because it's too messy and he's embarrassed?  Well, I bet it looked like the inside of Steve's bar.  Ugh.  We drank our beers, waved to the camera, and left.
Posted by Adam K. at 8:25 AM No comments: 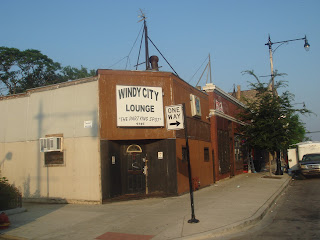 Windy City Lounge is the first bar we have been to that has been in a predominately African-American neighborhood.  It's in the Austin neighborhood on West North Avenue, which if you've lived in the city, is near some pretty rough areas of the city.

Some of you may wonder why we bring up race or nationality in the bars we review, and we think it gives you, the reader, a good gage of the different neighborhoods we are going to.  And if you ever feel like going to any of these bars, I think you may want to know what types of people will be there: white, black, Latino, gay, firefighter/cops, or even frat-boy douchebags...

So we walked in and no, this didn't happen...  There were just two guys in there playing pool.  We ordered an Old Style and started chatting with them.  It was Mark, the bartender, and Sam, a guy who has always lived in the neighborhood and has been coming to this bar since he was underage.  He also told us that back in the 80's this place was a big biker bar, and then eventually turned into a hang out for African-Americans.  It was called Shorty's for a while, and then about 10 years ago turned into Windy City Lounge.  They were telling us about how crazy the weekends get at the bar, about the free food the offer during the football games on Sunday, and were trying to convince my brother to have his bachelor party there.  We then got to playing pool, and my brother, who if you remember cannot beat me in darts, proceeded to hustle me, Sam, and Mark.  He was playing the best pool of his life, got a few breaks, and took our money.

Sam headed off to work (yes, work), and Mark asked us where we were going next.  Basically, he wanted to make sure we weren't going West...nope we were going back East, so we were okay.  Mark did say that he would be willing to take us around to other places in the 'hood if we ever wanted.  Sounds fun, but I think we'll just be back for that free food on Sunday...
Posted by Adam K. at 8:06 AM No comments: