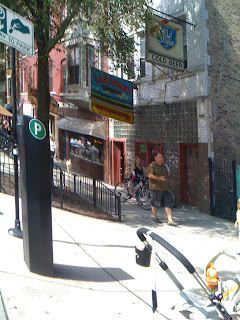 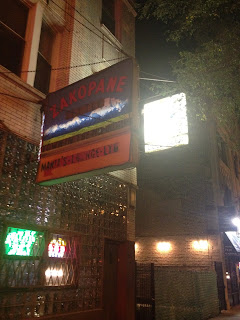 PART I - THE HISTORY

Zakopane, named after a town in Southern Poland, is the last true Polish bar standing on Division St. (a.k.a "Polish Broadway"), which at one point in the 30's and 40's was the hottest place in the city to catch live Polka music.  Polka was HUGE at the time in Chicago, and one of the best polka musicians in the world, Li'l Wally, played at the bar with his band on a regular basis.  This guy was so good, he was one of the first two people to be inducted into the International Polka Hall of Fame, certifying himself as the "Polka King of Chicago".  The other inductee back in 1969, Frankie Yankovic (no relation to Weird Al), was the biggest Polka musician in Cleveland.  He also wrote the song "Let's Go Go Go White Sox", but honestly, he's no Steve Goodman.

(Side note: Our grandfather, who was an avid Old Style drinker and Polka fan, gave my brother an accordion when he was in high school.  After Frank Yankovic died in 1998, my brother wrote Frank's widow a letter saying he was a big fan.  The woman sent Aaron a huge care package a few weeks later, with stickers and cassette tapes, saying she was so happy he had younger fans...it was awesome.)

Back in 1999, Chicago's favorite punk-polka band The Polkaholics played a legendary show with Li'l Wally back at Zakopane.  Having retired to Florida, Wally came back to play this epic show, which was captured in a documentary.  Zakopane rarely has shows anymore, hiding the stage behind a red curtain, but anyone would be luck to share the same stage as the Polkaholics and Li'l Wally. 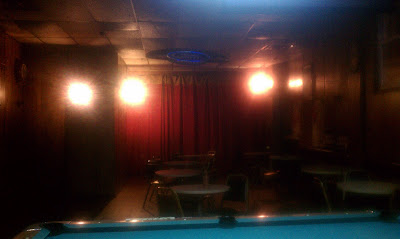 If you don't look high enough, you may miss the Old Style sign above Zakopane.  It's actually hanging on the 2nd story of the building.  What you won't miss is the Zakopane sign, along with the sign of the previous bar, Maria's Lounge...yep, that one is still up too.  When you walk in, the bar is on the right and the jukebox on the left towards the end of the bar.  Bathrooms are on the left and in the back is the aforementioned stage area with the red curtain.

The real attraction at Zakopane is Monika. 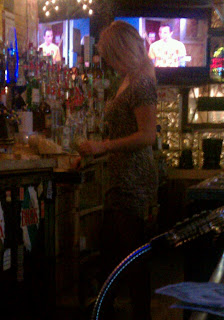 The blonde, curvaceous bartender worked the crowd with the grace of a ballerina.  One minute she's pouring shots of Zubrowka for a group at one end of the bar, then dancing with some shady old guys on the dance floor, and then outside having a smoke with some more of the bar regulars.  The bar was packed, and she was gone for 5-10 minutes and people didn't mind waiting for her to get back to order their next beer.  As she walked back in, necks turned as she went over and put in a bunch of songs on the jukebox.  G'n'R...nice.  The bar was hopping...it seemed like everyone knew each other and everyone was just having the time of their lives.  This bar had the most energy of all the bars we've been to.  If you walked by, you'd definitely say the bar was "hopping".  Everything revolved around Monika...it was incredible.  More people started dancing in the back as Guns n Roses turned in to Polish dance music...the place was up for grabs.

Li'l Wally would have been proud.
Posted by Adam K. at 3:32 PM No comments: 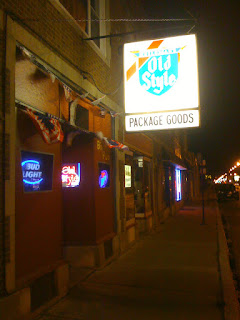 I was excited about Bill's because some of their Yelp reviews talked about how cool the place was decorated for Halloween.  Well, that was then and this was now...there wasn't a single decoration up, just some weak wooden replicas of the Chicago baseball stadiums.  Bill's doesn't distinguish itself as a Cubs or Sox bar, but Cubs fans usually sit on the left side of the bar where the Wrigley replica is, and Sox fans on the right side under U.S. Cellular.

Chris was the regular, who had 70's acid rock on heavy rotation on the jukebox.  He also told horrible jokes and mumbled a lot, mentioning 'heroin' to us a few times (we didn't bite).

The bartender, Sylvia, was a nice woman...she even gave me a cough drop...was getting over a cold.  Not sure what brand it was--it just said "cough drop" on the wrapper.  It could have been 10 years old for all I know.

Oh, and considering the clientele that frequents Bill's Pub, this is probably a good thing: 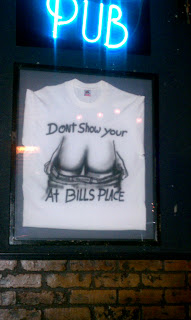 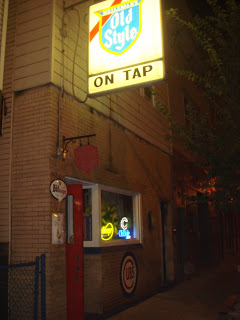 The Home Tavern has the most accurate name of any bar we've been in...golf clubs in the corner, plants everywhere, and a huge bag of dog food sitting next to the pool table.  I think we warped into some dude's basement when we walked in the door.  The dog food belonged to a nice black lab named Potato who never moved the whole time we were there.  Also, there is a very creepy collection of stuffed toys that hangs from the ceiling (no picture, which I will describe why in a minute).

The highlights of the evening were this exchange between two regulars:

"Hey Nancy, what's new?"
"Well, I saw that 'Craigslist Killer' movie the other night, and it really reminded me of you..."

Also, there were a couple of locals hanging out, and these guys were true locals.  They grew up and have lived in Lincoln Park for 40+ years...never left the neighborhood as it has changed over the years.  These were some tough mofos too...one guy, Mike, decided to tell us his entire life story, and it scared the shit out of me.  I didn't want to break eye contact in fear that he was gonna bust his beer bottle over my head.

Mike told me about his four daughters, and how his oldest one was dating a real degenerate, and that their car was just repossessed.  He also then told me that he might have to deal with the situation himself (like this guy), and then tells us about his time in prison (stealing cars) and shows us the scars from when he got stabbed (was hanging in Mexico with the wrong people).  Then he rants about how technology is ruining the kids nowadays...needless to say my iPhone stayed in my pocket the whole time.

I did my part though.  I listened.  Mike and I hugged it out when we left.  I survived.

A warning to all you Lincoln Park-ers with the popped collars, texting your buddies non-stop, drinking Bud Light Lime and doing Jaeger shots.  Don't go to the Home Tavern, because if Mike is there, he will mess you up...