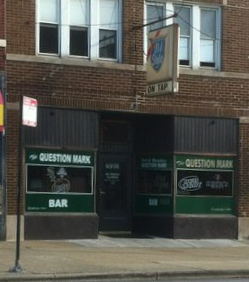 The Question Mark Bar is about as west as you can get in Chicago before hitting the suburbs.  Located in the Montclare neighborhood, the Question Mark is the last stop on your way to Elmwood Park.  The bar was a lot smaller than I expected, a real hole in the wall with not much space.  There were a few video poker machines at the front and a jukebox in the back.  The crowd this particular night were lonely, middle-aged white guys ogling the attractive, middle-aged black bartender.  In between serving drinks she was putting up a killer playlist on the juke...all classic funk and R&B music from the 70's and 80's.

We sat there for two Old Style's, enjoying the music and the interesting vibe going on in the bar.  We even got to hear some Terrance Trent D'Arby!  We finally got a chance to as Adele about the origins of the bar.  "The name?", she said, "I have no idea...matter of fact, I don't think anyone knows...the bar has been here since the 40's.  I guess if we knew the answer we'd have to change the name of the bar!"
Posted by Adam K. at 2:31 PM